Giving the Gift of Relief 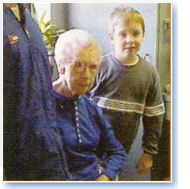 I had been very concerned about my aunt, Darcus Key, for a long, long time. Now 77, she had been suffering from severe Rheumatoid Arthritis for 42 years. She's endured eight major joint replacement surgeries, including both wrists and hands. My aunt has also suffered from extensive drug-induced side effects. Although she has been prescribed many medications to alleviate her pain, after two months she had not experienced any relief from her most recent prescription.

For five weeks, she'd had severe, debilitating pain from a compression fracture of a vertebra. She had been unable to even turn over in bed. Even taking several doses of two different medications daily, she was still in extreme pain.

She has also suffered from anxiety for many years, and had expressed concern on many occasions about being able to continue to endure the chronic pain and her general failing health. She is still living alone, but has had a caregiver during the day for the last six months.

When I heard about Maharishi Vedic Vibration Technology for chronic disorders, I decided to offer it to Aunt Darcus as a gift. She was in a wheelchair at the time, unable to stand alone. We signed her up for Rheumatoid Arthritis pain and for anxiety.

During her first one-hour session, she gained a 90 percent improvement in her pain disorder. She describes the relief as "unbelievable." She experienced pain-free deep relaxation and peace. She became so relaxed that she fell asleep during the session.

For the next 36 hours, she enjoyed freedom from pain for the first time in many years. No pain medications were needed, and she enjoyed deep restful sleep. Her anxiety level was reduced at least 90 percent as well.

Unfortunately, the next day her progress was interrupted. Due to severe drug-induced gastritis, possibly an allergic reaction, she ended up in the hospital emergency room. The compression fracture pain returned during the extreme stress of vomiting. However, no arthritic pain had returned. Five days went by before her next Vedic Vibration session. Some anxiety had resurfaced, but it was not as severe as before the program.

My aunt eagerly awaited her second session. Again she experienced deep restful peace during the program. Her progress was amazing-that afternoon she was able to get up and walk with some assistance. Emotionally, she was elated and the anxiety was gone again. She continued to rest well and began to regain her physical strength.

Her third session was filled again with deep relaxation and joy. That afternoon she walked unassisted for the first time in months. She expressed her deep love and appreciation to the expert of Maharishi Vedic Vibration Technology who had helped her so much.

Now it has been almost two months since Aunt Darcus completed the program. She has been receiving massages with the sesame oil three times daily. She has not experienced any arthritic pain at all. The pain from the fractured vertebrae is manageable now. She says that if she begins to feel any pain, she closes her eyes and recalls the memory of how she felt during the consultation — peace, freedom from pain, and joy. When she opens her eyes, the pain is gone. The memory of health has been restored!